Politics is central to education and grant making in South Africa

South Africa has had an interesting 2018 to date, and the strong links between politics, education and grant making are as evident as before.

Politics has been at the epicentre of our lives in South Africa and, certainly, in the first quarter of 2018, we experienced a period of political milestones. We celebrated the 26th anniversary of Nelson Mandela’s release from prison in 1992, and we had a president resign and a new president elected. These changes resulted in a heightened sense of energy and hopes for a more accountable government with deliberate efforts to root out corruption.

A new president and a new Cabinet have resulted in some speculation about the future of education. There is welcome consistency – the Minister of Basic Education remains – but we have a new Minister of Higher Education to navigate the fraught and contested terrain of the cost of university education for the poor.

Politics and education are inextricably linked. This relationship has evolved over the years and has, in turn, determined the behaviour of grant-makers. In the period prior to democracy, the Apartheid government used education to subjugate Black South Africans and education became a site of struggle. The slogan “freedom before education” reverberated across South African townships and we experienced mass detention of young people. With the support of international donors and friends, we saw the demise of Apartheid.

Then we had the birth of South African democracy. South Africa was hailed for a peaceful political transition, and Mandela became a global icon, epitomising peace and harmony. His love of children placed education at the centre of South Africa’s reconstruction and development, and there was substantial local and international funding to support this focus. Mandela was known to make personal calls to request funding to build schools. This period was characterised by hope and optimism – so much so that many civil society organisations believed that the government would deliver, and consequently some donors put their support behind government-led development initiatives.

The Thabo Mbeki presidency was characterised by a period of stability and economic growth. South Africa began to take its rightful place in the international arena. With this relative economic prosperity, we experienced a decline in support from international donors. This had a huge impact on NGO infrastructure – many could not survive and closed down. Ten years into democracy in the Thabo Mbeki era, our idealism began to fade and the reality of the task to reconstruct South Africa in the post-Apartheid era hit home. There was an emergence of civil society activism in both the health and education sectors, but this was often not well received by the government. The belief held by some was that foreign funding was fuelling activism campaigns, which were viewed by many in power as having an anti-government agenda.

In the first years of the Zuma presidency, the government increasingly acknowledged the problems facing the country. There was a call for government, civil society and business to join hands to address these challenges. A dedicated Performance Monitoring and Evaluation Department was set up to hold ministries to account for delivery. This was indeed a refreshing change and definitely had a positive impact on the growth of monitoring and evaluation in South Africa. Civil society became more vocal, and advocacy around education grew. The funding community in South Africa focused on education delivery, and education advocacy campaigns and education research were largely funded by international donors, with only a few South African donors active in this space.

The latter years of the Zuma presidency were tainted by allegations of state capture and corruption. Corruption became a real concern in many sectors of society and the education sector did not escape unscathed. Corruption Watch reported that over 60% of all their cases under investigation were from the education sector, and largely centred on allegations of corruption in the procurement of goods and services for schools. The economy declined and South Africa was downgraded by international rating agencies. This has had a major impact on state expenditure on social services, including education. Investor confidence declined and was at an all-time low as calls for the removal of President Zuma grew.

In February 2018, Jacob Zuma resigned and Cyril Ramaphosa was elected President. There was strong support for this change, which was seen by many as a new dawn, ushering in fresh energy and a sense of rebirth and renewed hope. Some of the Ministers implicated in state capture were removed in a Cabinet reshuffle, and the phrase “Ramaphosa Spring” was popularised to characterise a general sense of hope, rebirth and renewal.

As we adjust to this change, donors can play a critical role in South Africa, both as partners with government and in holding the government to account. Education still faces many significant challenges. In addressing some of education’s most intractable problems, it is vital that we all share a commitment to improving the lives of South African children for a better South Africa and a better future.

Next →
Recent posts in category : Newsletters

END_OF_DOCUMENT_TOKEN_TO_BE_REPLACED

Since 2011, the Zenex Foundation has been at the forefront of supporting initial teacher education...

END_OF_DOCUMENT_TOKEN_TO_BE_REPLACED

Lessons and Reflections about Implementing M&E in South Africa

Monitoring and Evaluation (M&E) is an important and integral part of the Zenex Foundation... 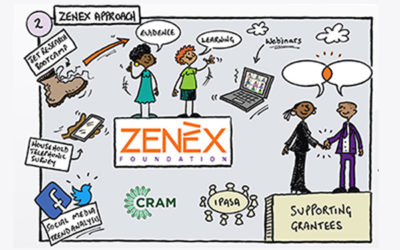